Chocolate comes from an edible seed the cocoa bean. It contains caffeine and another substance equally undesirable from the point of view of health theobromine. It contains some protein and considerable fat and must be sweetened with a lot of sugar to make it palatable. It has been incriminated as one of the foods probably involved in causing the teenager's plague of acne.

Although it contains calcium, it also is rich in oxalic acid which makes the calcium unavailable for the body. Chocolate is one of the most common allengers. 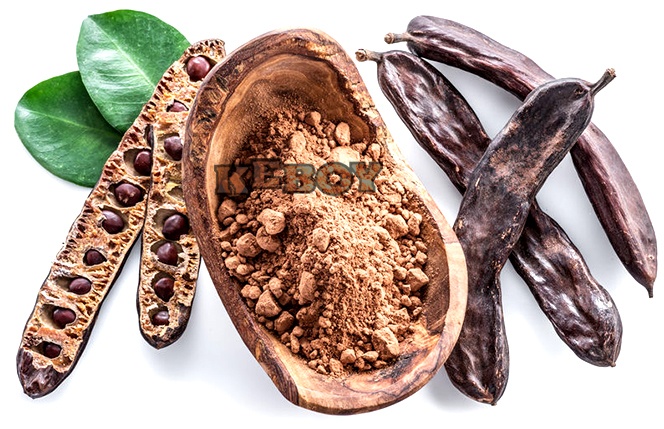 Why do we go on eating chocolate in such quantities when there are so many things to be said against it, nutritionally speaking? Well, it tastes good and there isn't anything quite like it that might substitute for it. Or is there? Carob tree ( ceratonia siliqua), grown extensively in the Middle East, produces a long pod which, ground into powder, tastes so much like chocolate that most people can't tell the difference. And it has so many health-giving things to recommend it that we are sure your family, too, would prefer it to chocolate.

Carob is referred to in the Bible. It is probably the food that sustained John the Baptist during his sojourn in the wilderness. Hence it is often called St. Johnsbread. The husks of the caob tree are probably the husks which the Prodigal Son watched being fed to the swine. For carob has been the food mainstay of many people in the Near East for thousands of years. The seed of the carob tree was the original "carat" which goldsmiths used for weighing gold. The tree is tender and needs a fairly warm, dry climate to succeed.

Now for carob powder. This is the long pod of the tree, ground into fine flour. You do not use it to make bread as you use other flour, for it is quite sweet and the taste is almost not quite but almost the same as chocolate. In fact you can use it in any recipe that calls for cocoa. The amount to use depends on how much of a "chocolaty" taste your family prefers. You will find that you need considerably less sugar than you would need with cocoa.

Carob contains good, natural carbohydrate 72 per cent of its total content. Sugars make up almost 50 per cent of carob flour. In addition the following minerals are present: calcium, phosphorus, magnesium, potassium, silicon, iron and a number of trace minerals.

Since you do not eat carob in the quantities in which you use milk, we do not suggest that you depend upon it to supply all your potassium needs, since you do not eat it in the quantity in which you eat beans or soybeans. But you can be sure that the minerals are there. They have not been removed in the processing as they have been in white sugar.

Carob comes equipped, also, with considerable amounts of the B vitamins, thiamine, riboflavin and niacin. It is 7 per cent ptotein and contains a bit of fat. It also is rich in pectin, the substance which we use to make our jams and jellies "jell."

Pectin is beginning to be quite an important food element these days as more and more is being discovered about its properties. For intance, it has been shown that pectin is effective in combining with certain harmful elements of radioactive fallout and carrying them harmlessly out of the body. This surely makes it one of the most important diet aids we have today when all food we it is more or less contaminated with fallout.

Pectin is good, too, for regulating digestion.

And carob flour, specifically, has been widely used for arresting diarrhea in children and preventing its recurrence. In every case this was simple diarrhea which was not caused by a germ of some kind or by some much more serious disease. It was, instead, the diarrhea that occurs because of some digestive upset, or hot weather or fatigue. In young children it can be a troublesome or perhaps quite serious disorder.

The carob was given in a five percent concentration that is, about a tablespoon of carob to about a cup of water or milk. In most cases good results were obtained within a day or so. A number such successful experiments were reported in the medical literature around to beginning of the 1950's. These reports appeared in the Journal of Pediatrics, Texas Journal of Medicine, Pediatrics, Kentucky Medical Jounal and the Canadian Medical Association Journal.

The Canadian doctors stated, "It is our opinion that carob flour is unexcelled by any other pectin base medication that we have heretofore employed." European doctors have used carop flour extensively, believing that both the pectin and the lignin it contains are beneficial for diarrheal disorders. Lignin is the woody part of the carop pod.

You can buy carob flour in your health food store. You can use it in recipes which require chocolate. It makes a fine between-meal beverage, mixed with milk or water and sweetened with a little honey or blackstrap molasses.

Your health food store has, too, many products which contain carob cakes, cookies and candy the healthful kind, made with raw sugar, whole grain flours and many highly nutritious nuts and seeds.

Remember that carob flour has none of the disadvantages of chocolate and has the same fine taste and rich goodness. Get used to buying it always for flavorful desserts and between meal snacks and drinks.